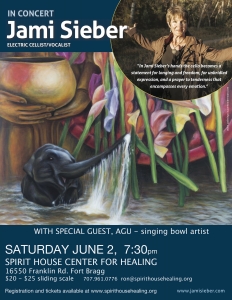 "Spirit House Center For Healing" is THRILLED that Jami Sieber is returning with her soulful music! Yeah~!!!!
Spirit House gives a 5 hearts-up recommendation for Jami's music and special guest Agu (bios below) ~ many will remember Jami's debut World tour kickoff of her cd "Timeless" at Spirit House Center that took all of our blessing with her~!! This event will sell out so advance ticket sales are a MUST~!!!!!!
About Agu: Agu is a singing bowl artist and ceremonialist. She released her debut recording “Reach In: Singing Bowl Offerings by Agu” in 2016. It was produced by Jami Sieber and features Jami’s cello on a couple cuts. Since the release of Reach In, Agu has been performing in rituals, ceremonies, and the CD has been a favorite for many healers and therapists. “Agu’s debut recording reveals a rich, contemplative acoustic sound of uninterrupted beauty that musically guides the mind and body to Relas, Focus, Create, and Awaken the gifts within."
Saturday June 2nd. 7:30p.m.
Cost: $20 - $25 sliding scale
Tickets available at: http://spirithousehealing.org/content/donations
additional info. call (707) 961-0776 or e-mail: ron@spirithousehealing.org
“Jami Sieber plays music on electric and acoustic cello with a passion that translates into soul-baring poetry.”
– Richard Klecka, Conscious Choice Magazine
“In Jami Sieber’s hands, the cello becomes a statement for longing and freedom, for unbridled expression, and a prayer to tenderness that encompasses every emotion.”
– Lloyd Barde, Music Editor – Common Ground Magazine
Electric cellist and vocalist Jami Sieber reaches inside the soul with compositions that are contemporary, timeless, lush, and powerfully evocative. Her style of performance has been recognized internationally. An innovative musician, Jami’s music moves beyond the surface, seeking and re-seeking her truth by creating musical bridges and connections, committed to doing what moves her and inspiring listeners with her honesty, musical prowess, and humanity. Her life-long commitment to the environment, social justice, and the healing arts is at the heart of her music, reflecting a deep dedication to the arts as a medium to express the interconnectedness of all beings.
This sometimes ethereal, sometimes hard-edged musician has earned rave reviews throughout Europe, Asia, and North America. Employing looping devices and electronics to create sounds never before associated with the cello, Sieber transforms her solo instrument into an orchestra of sound that opens the heart, defies the mind, and sets the body dancing. Sieber’s musical path has traveled from classical to folk to rock/pop where within her popular band “Rumors of the Big Wave”, she garnered the coveted Northwest Area Music Association (NAMA) Award for Best Rock Instrumentalist. Since launching her solo career in 1994, she has performed her original compositions around the world, diving into dynamic collaborations with an extraordinary spectrum of dancers, actors, poets, visual artists, improvisers, vocalists, and instrumentalists that span the globe. She has been commissioned to compose for film, (As She Is, PBS American Masters – Dorothea Lange: Grab a Hunk of Lightning, Big Joy: The Adventures of James Broughton, Queen of the Sun: What are the bees telling us?, Climb Against the Odds, Jews and Buddhism: Belief Amended, Faith Revealed, Hope is the Thing with Feathers) theatre, (Orpheus, TS Crossing), dance (The Equus Projects, Llory Wilson and Tallulah Dance Co, Jeff Bickford, Facing East Dance Co.) and her compositions have been used in the popular video game – Braid. This sometimes ethereal, sometimes hard-edged, musician has earned rave reviews throughout Europe, Asia, and North America, having been an invited guest artist in China, Russia, the Balkans, Italy, France, and Thailand.
Sieber now stands fully in her own genre-defying musical style and while investigating Jami’s recordings you will be captured by her creativity and imagination as a writer, lyricist and instrumentalist. Each recording is a sonic journey exploring the breadth and magic of the acoustic and electric cellos, with compositions that will open the heart, defy the mind, and, at times, inspire body and spirit to dance. Jami’s independently produced recordings include: ‘Big Joy: Original Motion Picture Soundtrack’ (2014), ‘Timeless’ (2013), ‘Unspoken: The Music of Only Breath’ (2008), ‘Only Breath’ (2007), ‘Hidden Sky’ (2004), ‘Second Sight’ (1998), and ‘Lush Mechanique’ (1994). Victory Music says, “…these musical paintings hang, framed in her own passion and dreams. If you’ve ever taken a journey of the soul, be it to another place or your own backyard, this music will play back every scene.”